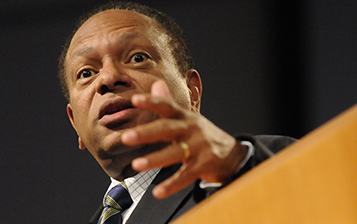 Stephen’s work has been featured in numerous business articles including; The Wall Street Journal, Harvard Business Review newsletter, and by Oprah Winfrey in several issues of O magazine. In addition, Time magazine featured Stephen’s MicroInequities program in their annual “WHAT’S NEXT” in the leadership category. Inspiring so many powerful players in the corporate and academic worlds—not to mention Oprah—is no small feat, and so we jumped at the chance to sit down and delve a little deeper into the theory of MicroMessaging and how an awareness of it can help to create great leaders, and in turn impact productivity.

We believe that knowledge of MicroMessaging is the cornerstone that defines our ability to be an effective leader. Without this knowledge and skill, we merely function as task-driven colleagues or managers. When someone learns how to apply these concepts they are able to alter loyalty, motivation, inspiration and—ultimately—the performance of others.

Q: What is The concept of MicroMessaging?

MicroMessaging is about the subtle things that we do and say that reveal infinitely more information than simply the words we use. We don’t consciously think about the looks, the gestures, the tone of voice, and all the innuendos that makes us believe we’re doing the right thing. For example, I could come into the office in the morning, greet you, and do all the right things: shake your hand, and say, “Good morning Hannah, how are you? How was your weekend? How is the project coming along? What about that other situation? Good. If you need my help, I’ll be in my office. It’s good to see you.” Before heading to my office, however, I take a couple of steps to the right to greet one of your colleagues, and you observe me lean back, tilt my head, smile, open my arms, and say, “Hey! Billy, man, what’s going on? It’s good to see you.” And you immediately know that Billy and I are connected, and you and I are not.

So while neither greeting was wrong, an important message was conveyed via their delivery.

Q: How does this impact productivity within an organization?

MicroMessaging is at the center of how we affect productivity. The proverbial slave driver, who stands over people, and makes them work, no doubt has an impact on productivity but no one would identify that personality type as an effective leader. When we talk about great leadership, we’re talking about people who are respected and admired. People aren’t typically respectful of managers who achieve productivity by cracking the whip. Rather, a great leader achieves improved productivity by making people want to work, and want to be committed, and the only way you do that is by sending the right messages to motivate.

Can you give an example of how this might play out in a real-life scenario?

Sure. Say you give a presentation to a team that I manage. Afterwards, I could either give you feedback by saying, “Let me tell you what you did wrong,” or I could come to you and say, “Hannah, let me offer some suggestions that might help next time.” That slight modification in phrasing is the difference between your shutting off and becoming defensive, and your being receptive to my feedback.

Q: How do MicroInequities play into this?

The best way to explain MicroInequities is with another example. At last month’s South by Southwest Conference, Eric Schmidt, Executive Chairman of Google, was on a panel with biographer, Walter Isaacson, and Megan Smith, CTO of Google for the United States. When it came time for questions, Google’s Chief Diversity Officer, Nancy Lee, stood up and said, “I have more of a comment than a question. Research shows that women are interrupted at a much higher rate than men. Did either of you know that you both consistently interrupted Megan while she didn’t do that to you?” Now, Lee took an enormous risk embarrassing her boss in that manner, but her comment then became a national and global story, raising awareness that the unconscious biases we hold allow us to behave differently to some groups of people. And even though he was touting how supportive Google is in the world of diversity and inclusion, Schmidt was, in fact, exhibiting behaviors that conflicted with his message. The irony was striking.

Now, unconscious bias is an intangible, psychological state of mind – it’s not something you do, just as you don’t do anger. So, to your question, the MicroInequity was the interruption; the state of mind that caused the men to interrupt is the unconscious bias. On the other hand, by the way, the micro-advantages are the messages we send that can enhance, develop, and motivate people to perform well.

Q: Do you have any case studies from the years that you’ve been teaching this?

Yes. Merck did a very comprehensive, longitudinal survey of their employees 6-9 months after they attended the seminar.

One of the questions on the survey was “Have you taken what you’ve learned through this program and actively applied it to turn around a problem relationship in the workplace?”

90% of employees said they were aware of the MicroMessages they send and receive; 55% indicated they had conversations with others at work regarding a MicroMessage resulting in improved work team norms, communication skills, and meeting norms; and this resulted in an 85% reported improvement in business relationships.

Now, according to our work with MIT, which is where this whole concept originates, we were told that if 20% or more of the people reported having used this to turn around a so-called “problem relationship,” it would be considered significant. In addition, just recently, Chris Eisgruber, the President of Princeton University, invited me to do a session with the college’s eight deans. Afterwards we received one of the most glowing letters of response, speaking to the power that this message has, and how important it will be to bring this into the university on a broader scale.

On the corporate side, I was in a meeting with Bob Benmosche, the former CEO of AIG, who recently passed away, and he was so resistant to the concept at first. But at some point, it clicked, and he turned to me and said “This is such a powerful message, that I want everyone at AIG worldwide to experience this seminar. I think that when they do, it will change everything about how effective they will be in the development and the leadership of their teams.” We’ve since worked with thousands of executives and leaders at AIG, simply because this very tough and demanding character actually broke through and saw this as something that could have a tremendous impact.

Q: In your years of delivering this seminar, have you felt the effect of micro-advantages or MicroInequities from your audience? And if so, how do you overcome them?

I’ve been asked a billion questions before but nobody has ever asked me that! Well, a common MicroInequity I see is a person on their smartphone or laptop. (And, by the way, we call it a “MicroInequity” only because we don’t believe that they’d be doing it in front of their CEO. It’s not a MicroInequity if I do it to everyone; it’s bad behavior and obnoxious, but it’s not an “inequity.”)

So to answer the question directly, when I see people doing it, I will send a MicroMessage that suggests I’m observing what you’re doing. I also send that message in a way that says “I don’t like that it’s happening.”

I will look at them, try and catch their eye. I tilt my head when they’re doing it. I’ll sometimes walk up close to them, and stand next to them while I’m addressing the entire group. During the break, I might then go up to the culprit and say, “You know, I couldn’t help but notice that you have something critical that needs to be done. Considering this seminar is about the sending of messages that show disconnection, if there’s something that’s really more important, don’t feel obligated to stay in the session.” So I say it in a way that’s respectful and supportive. I don’t say “So would you please leave?”

Q: Lastly, what are you currently working on? Anything new?

I’m working on a new edition of MicroMessaging: Why Great Leadership is Beyond Words, and also a second book, The Evolved Leader, which examines the theory that we pick our leaders based on their physical dimensions.

You can learn more about Insight Education Systems programs, workshops and products at insighteducationsystems.com, or contact us at info@insighteds.com.